I gots learned... by a still life.

So I'm finally over my sickness and have more energy to get stuff done; namely work on art and other various activities around the house one of which includes doing away with the hideous border wallpaper in the kitchen.

The Other Half and I are also getting ready to head off to Florida in a few weeks and we're trying to make sure that we have everything that we need since I am notorious for forgetting important items. In relation to that, one of the tasks I got done this week was book our car rental and I think it's fair to say that the Other Half is now more excited about that than the actual trip itself since I have supposedly rented us a Dodge Avenger. What I failed to mention to him was the fine print that said: 'Or vehicle of a similar class'... whatever that means.

I haven't done any more work on my equine piece but here's another one that I completed just before Christmas that I'm particularly pleased with: 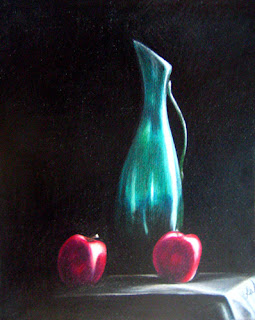 I have this vessel out on display at home and I've always loved it. Love the colour, love the shape, love the glossiness... basically I just love everything about it. This is the first time I used it in a composition and I can say with certainly that I'll use it again. Even though the composition for this is really very simple it made me appreciate the difficulty in getting things 'just right' in terms of placement and lighting. That said, I enjoyed the process since I learned something. Yes, I am trainable.

So, I also have a few other projects on the go and one Top Secret project that will remain in that state until further notice. If I'm feeling cheeky I'll be sure to drop hints every now and then just to drive folks mad with wonder.

Just a small update this time. We had some unexpected snow yesterday and I couldn’t resist taking the dogs out to play, especially since it’s been quite mild the past few days making it very comfortable for getting outside (even if I do still have a cold). 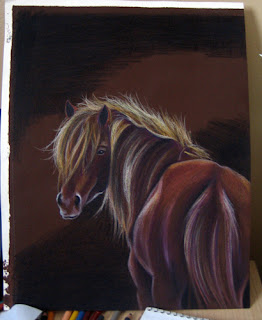 Still un-named...
Coloured pencil on Colourfix
I’ve filled in more of the background and punched up some of the colour on the horse and am letting it sit for now. I need to mull over exactly how I’m going to finish up the background and I also need to figure out how to push the values more to make them “pop”.
I have another work that I finished up awhile ago that I’ll share in my next post. So just a small update and if you’ll excuse me now I’d really like to take the dogs out again.
Toodles!
Posted by Rita at 3:34 PM No comments:

Sorry for the delay in updating. I've been sick the past few days and when my throat wasn't bothering me my body was aching and it felt like there was a troupe of dwarves performing a rendition of 'Riverdance' on my brain.


So below is part 3 of the yet un-named equine piece: 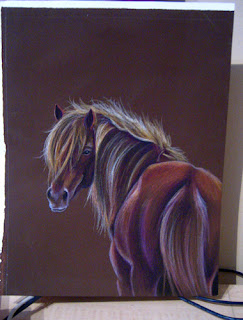 Still untitled and I'm open to suggestions...
Coloured pencil on Colourfix
I'm having quite a bit of fun with this one since, as I mentioned previously, it's been awhile since I worked on colourfix and to be able to whip out the yellows, oranges, hot pinks and purples at this time of year is always a treat! It's also been a good long while since I've done an equine piece and this particular one is just the thing I need to get back into it.
Oh, and here's part 4: 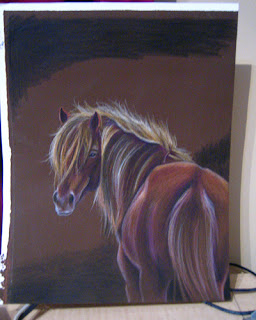 Really... suggestions for a title??
My apologies for the slight blurriness of this one but Gizmo, aka- the Thunderbolt Kitten, was milling about the desk and was knocking my pencils off and subsequently attacking them and carrying each one off to its imminent demise. If it were a mouse I wouldn't care but when the pencils go for about $2 a pop you better believe that the only demise they'll be meeting is from the wrath of my pencil sharpener.
So there's the update for now. I've had about 3 tablespoons of Buckley's, played with the dogs out in the snow (or "Snowmageddon" as one Kingston radio station referred to it), ate a piece of cheesecake and am now feeling significantly better and that my sickness is just about over. I'll have another update this weekend and perhaps even a rant over some of the idiotic things I've seen on the roadways as of late. After all, who doesn't love a good rant?
Until next time...   :)
Posted by Rita at 4:25 PM 2 comments:

So today's post contains the first 2 images of the other wip I have on the go. It's an equine piece and the reference picture is one that I've had for quite awhile... I just wasn't sure how to proceed with it. 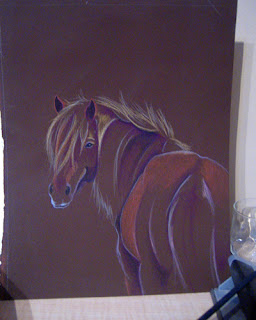 Yet another un-named piece
11x14, coloured pencil on Colourfix
It's a pretty decent size, 11x14, and I'm using Colourfix for this one because 1- I seem to have an abundance of it hanging about and 2- I was initially thinking that I'd be doing a lot of layering for this one and, wouldn'tcha know it... I was right!

There was a piece I did a few years back, "Windy" (you can search for it with the search thingy on the side), that was a great learning curve for me in terms of incorporating more colour into my work and not being afraid of pushing the limits in terms of layering. There's a bit more of this piece below: 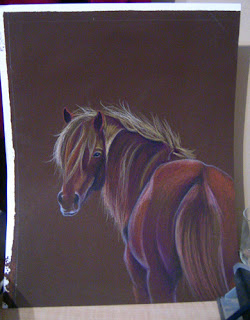 It's also been awhile since I've worked on Colourfix and doing this piece is reminding me how much I enjoy using it for certain works.

There's actually quite bit more that I've done on this piece but I'll hold off on posting more until later in the week. Two reasons: 1- I love keeping people in suspense and 2- I have a gimpy kitten I need to look after who is currently climbing on the desk and causing havoc in general, as kittens have a tendency to do.

So until later this week stay creative (and warm!)
Posted by Rita at 5:14 PM No comments:

Throwing caution to the wind

So as promised here’s some of what I’ve been working on. Staying true to form, I have several pieces on the go right now since I get bored easily.  ;)
I'm just going to post one since I have several shots of another and not a great deal of time to do this post. This one is actually an experimental piece in that the support I’m using is Masonite that’s been gessoed. I’ve tackled this particular subject before but I used oils and it was many years ago. I liked the image a lot but wasn’t quite sure if I was ready to try it in cp’s and what support I should use. Far be it from me to do anything easily so I figured why not make this as difficult for myself as possible and not only re-create the subject in cp's but also on a support I’ve never used before. 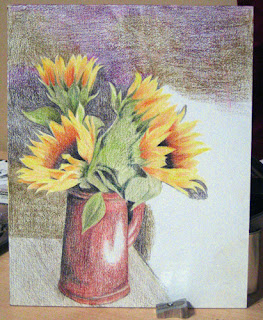 Untitled
Coloured pencil on masonite
Copyright Rita Woodburne
So there she is in all her work-in-progress glory.
It's supposed to be the temperature of Hell freezing over this weekend (and by that I mean not even the dogs want to stay outside) so I'm planning on doing a lot of indoor activities such as art, reading and removing the hideous border wallpaper from our kitchen.
In my next post I'll have some pics of the other piece I've been working on and, if I'm brave enough and the wallpaper doesn't give me too much trouble in its removal, some updates to this piece as well.
I guess I could include the kitchen as a work-in-progress as well...
Posted by Rita at 7:18 AM 3 comments:

Please disregard my last post since clearly I had lost my mind and had no idea what I was talking about.
So it’s a New Year and time for a new approach to things and a fresh start with life in general. The first thing I’d like to mention that’s going to change is this blog (hey, didn’t I say that before??)
What is going to change is the focus of my blog. While art is still going to be a huge part of it I’ve decided to “broaden my horizons” as it were and would like to include writing and gardening, an art form in and of itself (those that had followed me for awhile and know my love of diggin' in the dirt). Right now, unfortunately, life is too busy for me to work on art as much as I’d like to; but not busy enough that I can’t indulge in writing about some of the inexplicable things that happen to me over the course of a day.
The other thing that slowed me down was that my beloved computer finally had enough of my not backing things up and leaving files of a ridiculous size on its hard drive and, well… it died. Tragic, I know, but it happens to the best of us.
So, as it happens, not too long ago I acquired another computer and am now back up and running with memory out the yin yang! I still have to transfer some things (specifically images, which is why there aren’t any in this post) over from the old hard drive and get myself something to back up all my files. I consider my lesson learned.
So I haven’t dropped off the face of the earth, I’ve just been wandering aimlessly on its surface trying to figure out what to do with my blog. I’ve figured it out and hope that you’ll join me for the ride…
Posted by Rita at 5:13 PM 2 comments:

Just wanted to let you know that I'm in the process of updating this blog to bring it into the year 2010 and out of the dinosaur age. You know, way back when in 2006.

Since moving the Other Half and I have gotten pretty much settled and I"m in the process of "cleaning", if you will, both the laptop and desktop as well as other technologies.

So as the Summer wears on stay tuned for a fresher looking blog and some new artwork!
Posted by Rita at 8:36 AM No comments:

Rita
I don't really know what more you'd want to know? I wear a size 10 (sometimes 11) shoe so you can just call me Pontoon Foot if you'd like; although I should note that I have the smallest feet in my immediate family. I live in the Napanee countryside but have yet to tap into the local marketing brainchild that miraculously made Avril Lavigne famous. I can't eat spicy food and I don't like raisins. There, is that enough?

Other People Thinking Out Loud